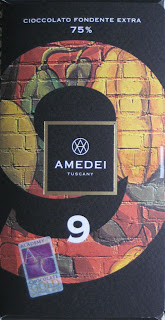 Italian chocolate maker Amedei has made some of our favorite chocolates, including their Chuao, our current absolute favorite, and the only bar both Lindy and I rated ****. The Amedei 9 bar is made from the cacao of nine of their private plantations. Although a blend of multiple cacao varieties from multiple regions, Amedei considers this bar their "family treasure".

The color of the Amedei 9 was a bit darker than most artisan chocolates, though the tempering and surface texture was similar to other Amedei bars. The two aromas Lindy and I both noticed were earthy and red fruit. We clarified the earthiness as musty, but didn't get a handle on the red fruit aroma. I also smelled a licorice scent.

9 had a slow start, taking a while before melting and releasing its many flavors. Eventually we detected roast (which I thought was coffee), citrus (which Lindy experienced as a faint lime), nutty, berry, cream, and a sweetness I noticed as molasses.

Its melt was smooth. Unfortunately, the flavor lasted only a few seconds after the chocolate was gone. Although the final aftertaste was not bitter, this chocolate left a faint citrus taste and slight acidity in the mouth that wasn't as nice as it sounds.

Amedei does not have list prices, but their chocolate bars are typically quite expensive. You can purchase Amedei 9 for $10.00 at Chocolopolis.

After reviewing Amedei 9 and writing this blog post, I looked up the sticker on the wrapper and discovered that this bar won the Academy of Chocolate's 2009 Golden Bean highest award. While this 2010 production of the 9 bar was good, we did not find it anywhere near as remarkable as the 2009 apparently was.

UPDATE: Amedei 9 also won a Gold at the Academy of Chocolate's 2011 Awards.