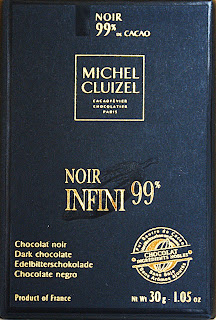 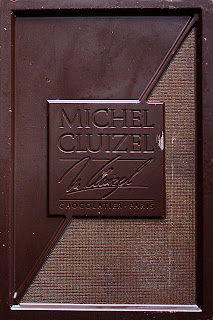 Michel Cluizel's Noir Infini is a chocolate bar made from 99% cocoa solids, with some added cane sugar, bourbon vanilla pod, and two unusual flavorings: ginger and cinnamon. This small 30 gram bar was sold in a simple black paper cover over gold foil wrapping the chocolate. The bar itself was unscored, stamped with an imprint of the chocolate maker over a background that is half smooth and half matte (as you can see in the picture above). Noir Infini had a medium-dark brown color of Seal Brown (PANTONE 19-1314).

This bar had a hard snap. The aromas of the chocolate were many, including spice, a smoky roast, a sweetness that reminded Lindy of hot chocolate, tropical fruits (of which coconut seemed most prevalent to me), some earthiness, and a hint of apricot that Lindy noticed.

As expected, Noir Infini tasted bitter. However, there were also flavors of coconut and a roast in the form of cocoa. Lindy also found the taste somewhat ashy.

The melt was thick and creamy. We disagreed on how long the flavor lasted after the chocolate was gone. Lindy felt it disappeared in 5-10 seconds, while for me it varied between about 25-40 seconds, so I rated it above as short-medium (the border of which is 30 seconds). The finish was bitter: strongly so to Lindy and slightly so to me.

Although Cluizel does not provide a list price for Noir Infini, you can purchase it online in the U.S. for $3.50 from Chocolopolis.