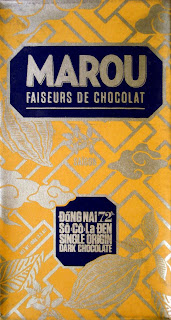 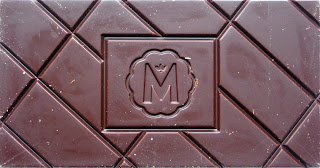 Marou, Faiseurs de Chocolat, is the first artisan bean to bar maker to craft chocolate in Vietnam made from Vietnamese cacao. Samuel Maruta and Vincent Mourou released their first bars in December 2011 from their small nut-free factory in Ho Chi Minh City.

All of their chocolate is made from only cacao, cocoa butter, and cane sugar. They also make the cocoa butter they use from their own cacao. Marou currently produces five bars, each made with Trinitario cacao from a different region within Vietnam: Ba Ria, Ben Tre, Dong Nai, Lam Dong, and Tien Giang.

Dong Nai So Co La Den was hand-wrapped in bronze foil-sided paper and sealed using a sticker of the Marou logo ("M"). It was then enclosed in an ochre yellow paper wrapper with silk-screened gold ink and closed with double-sided adhesive. Each regional bar has a different colored wrapper. Here's an article about the design of Marou's outer wrappers.

This chocolate contained 72% cocoa solids (cacao plus added cocoa butter) and 28% cane sugar. It came in a large 100 gram bar. I prefer these traditional full-sized bars that have often been replaced by smaller sizes in an effort to lower the price per bar. The Dong Nai bar had the Marou logo imprinted in the center and surrounded by diagonal scoring that gave pieces of different sizes. The best before date was October 25, 2013.

The color of Dong Nai was a medium brown Bitter Chocolate (PANTONE 19-1317). The surface was smooth with an uneven sheen. There were some bubbles and bits of adhered chocolate.

The bar had a hard snap. The aroma of the chocolate contained earth, wood, and roast scents. The roast included malt.

Dong Nai tasted sweet, with roast, spice, and earth flavors. The sweetness came in the form of honey. The roast was smoky. I tried to identify individual spice flavors, and the two closest seemed to be pepper and anise.

The chocolate had a smooth melt. The flavor lasted 25 to 30 seconds after the chocolate was gone, giving it a medium length. The final aftertaste was somewhat bitter and slightly sour.

You can purchase Marou Dong Nai 72% online for $9.00 from Chocolopolis.