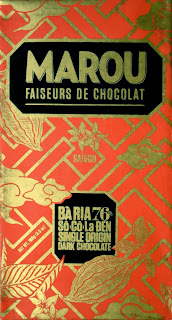 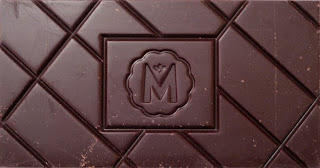 Marou crafts bean to bar chocolate locally in Vietnam. They make five bars, each from cacao of a different region in the country. All of their chocolate contains only three ingredients: cacao beans, cocoa butter and cane sugar. The bars are produced in their nut-free factory in Ho Chi Minh City (a.k.a. Saigon).

Ba Ria came as a nice, big, 100 gram bar wrapped in thin bronze foil-sided paper (with a sticker of the Marou "M") that was enclosed in a lovely bright orange-red wrapper with gold silk-screen (sealed with double-sided adhesive).

The bar was scored in different-sized pieces with diagonal lines and a central rectangle with the Marou logo. The surface was smooth to the touch and had a somewhat uneven sheen. The chocolate was a medium brown Dark Brown (PANTONE 19-1012) color. There were bubbles in some of the corners, adhered bits mostly on top, and visible lines from the wrapper. The bar had a generally good appearance in spite of all of these minor flaws.

Ba Ria had a hard snap. The aroma contained roast, spice, fruit, and earth scents. The fruit scent contained a hint of olive.

The chocolate tasted initially of a cocoa roast, but soon revealed sweetness and fruit flavors. The sweetness tasted similar to honey. The fruit was complex. Among the specific flavors I identified were raspberry and apricot, as well as a general citrus.

The melt was smooth. The chocolate flavor lasted about 45-50 seconds after the chocolate was gone, giving a long length. The finish was somewhat acidic and somewhat tannin.

Ba Ria was much fruitier than the other Marou chocolates. Of the five, I think I liked Dong Nai best, though Ba Ria was a close second. Here are the other reviews: Ben Tre, Dong Nai, Lam Dong, and Tien Giang.