During their anniversary celebration in July, Chocolopolis places golden tickets in three bars of chocolate in their store. Buying one of the bars with a golden ticket inside wins the buyer one free chocolate bar of their choice each week during the subsequent year! As you know if you're a regular reader, winning one of those golden tickets is what inspired me to begin my exploration of artisan chocolate and this blog. They'll be staggering the release of the three bars containing golden tickets over the month, with the first one being put out on shelves on July 7th, the second on July 14th, and the third on July 21st.

So, if you live in the Seattle area and haven't yet been to Chocolopolis, then this is the month to go and buy some great chocolate (and maybe find a golden ticket). Throughout the month, Chocolopolis will have single origin mini chocolate tastings every Tuesday and Saturday at 3 p.m. They will also continue their weekly Thursday evening (5 to 9 p.m.) free themed happy hour chocolate tastings that occur year-round.

During this fourth anniversary, they also have many other special events:
You can read more about anniversary and other events at Chocolopolis on their website.
1 comment:

According to the wrapper, Le Noir Amer was made from a blend of Trinitario and Criollo cacao beans. The ingredients were cacao beans, sugar, cocoa butter, soy lecithin, and vanilla extract. The chocolate contained 71% cocoa solids (the beans plus added cocoa butter).

The large 100 gram bar was scored into eight big pieces, each imprinted with diagonal parallel lines. There was also a Valrhona imprint shared among four of the pieces. The bar came wrapped in brass-colored foil inside a paper wrapper. The lot number of the chocolate reviewed here was 11073 and the best before date was August 2012.

The chocolate had a color slightly redder than a medium-dark brown Bracken (PANTONE 19-1015). The surface was smooth, with just a little scuffing. The bar had a hard snap.

Le Noir Amer gave off a roast and earthy aroma, with scents of coffee, cocoa, vanilla, fruit, and a hint of nut.

The taste was similarly full of roast and earthy, and the roast had cocoa and coffee flavors. It tasted sweet, with a fruit flavor that I struggled to identify. The fruit seemed to include a non-citrus orange.

The chocolate had a smooth melt. The length was medium, with the chocolate flavor lasting about 30 seconds after the chocolate was gone. The final aftertaste was tannin.

Although there isn't a list price for this chocolate, I purchased Valrhona Le Noir Amer at Trader Joe's for $2.99. As you can see on our Best Chocolate Values page, it's one of the better bars for under $1.25 per ounce.
No comments: 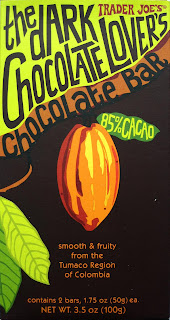 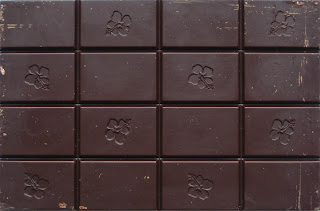 We first reviewed this chocolate in October 2010 and didn't like it at all. Based on feedback from our readers over just the past couple of months, though, we needed to try this chocolate again. I'm glad we did.

Trader Joe's sells several chocolate bars under its own label. Unfortunately, we do not know who actually makes the Dark Chocolate Lover's bar. The cacao for this chocolate came from the Tumaco region of Colombia.

The ingredients of Dark Chocolate Lover's were cocoa mass, sugar, cocoa butter, soy lecithin, and natural vanilla flavor. Cocoa solids (cocoa mass and cocoa butter) made up 85% of the chocolate. Inside a paper box were two 50 gram bars, each individually sealed inside a plastic wrapper with an image similar to that of the outer box. Each bar was scored into 16 pieces, half of them with a flower imprint. The best before date of the chocolate was 18 October 2013.

The color of the chocolate was a dark brown Seal Brown (PANTONE 19-1314). The surface was smooth with a glossy top. There were some bits of chocolate adhered to the top, mostly near the edges. The bar had a hard snap.

Dark Chocolate Lover's had a pleasant aroma of vanilla, marshmallow, and a butterscotch sweetness. There were also scents of roast and spice.

The chocolate tasted of roast, marshmallow, and fruit flavors, along with some underlying chalkiness. The taste was also slightly acidic.

The melt was more smooth. The chocolate flavor lasted about 20 to 25 seconds after the chocolate was gone, giving a medium length. The finish was somewhat sour, slightly acidic, and slightly bitter.

Both the aroma and taste were much better than the bar we reviewed in 2010 (perhaps it was from a bad batch, or it is greatly improved). Although the taste still did not impress me, you should try Dark Chocolate Lover's. If you like this chocolate, it's an amazing value at literally the lowest list price per ounce of any 100 gram or smaller bar we've reviewed.

You can purchase Dark Chocolate Lover's for $1.49 at most Trader Joe's stores.
8 comments:

Usually we wait at least a year before reviewing another release of a chocolate bar we've reviewed in the past. However, chocolate makers Robbie and Anna explained that our original review was of a bar from under-roasted batch 7, and we should try a newer release. You can read their thoughts in the comments below that review. For this review, we picked up a bar at Chocolopolis.

Ritual currently makes bean to bar chocolate with Trinitario cacao from the 2009 harvest of an unnamed farm in Guapiles, Costa Rica. The farm was certified sustainable by Rainforest Alliance. Although their Costa Rica bar was not certified, it was made from organic ingredients and with cacao purchased at above fair trade prices.

The ingredients of Costa Rica were 75% cacao beans and 25% cane sugar. The two ounce bar was scored into nine pieces and came carefully hard-wrapped in thin gold-sided foil. Recycled brown paper with an informative label enclosed the wrapped bar. The label indicated batch 11 and a production date of 11 November 2011.

The chocolate had a medium brown color closest to Fudgesickle (PANTONE 19-1431), but more brown. The surface was smooth with a glossy top. There was some unevenness in the sheen. The thickness was also slightly uneven, with one side being thicker than the other (probably due to the bars being hand-molded). The snap was hard.

Costa Rica had a coffee roast aroma, with additional scents of earth, vinegar, and blackberry. The aroma of this bar was much better than the one from batch 7, with the vinegar reduced to a pleasant level and none of the chemical scent we experienced with that chocolate.

The taste started out earthy, followed by a strong coffee roast. Cocoa joined in the mix as fruit in the form a strong blackberry flavor developed . The taste was also tannin and sweet.

This chocolate had a smooth melt. The length was medium, with the chocolate flavor lasting about 25 seconds after the chocolate was gone. The finish was somewhat tannin.

You can purchase Costa Rica online for $9.00 directly from Ritual, or for $8.99 from Chocolopolis.
3 comments: