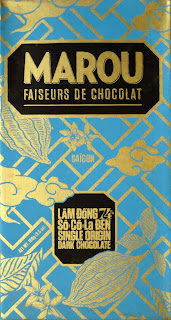 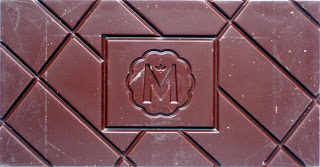 Samuel Maruta and Vincent Mourou make all of their chocolate in their nut-free factory in Ho Chi Minh City from three ingredients: cacao, cocoa butter, and cane sugar.

Lam Dong 74% came hand-wrapped in bronze foil-sided paper sealed closed by a sticker with their "M" logo. The outer peacock aqua paper wrapper was silk-screened with gold ink and closed with double-sided adhesive.

The 100 gram bar was scored with diagonal lines that provide pieces of different sizes. In the center was an imprint of the Marou logo. The chocolate was made with 74% cocoa solids and 26% cane sugar. The best before date of this particular bar was January 16, 2014, and the batch number was 288.

The color of the chocolate was a medium brown Fudgesickle (PANTONE 19-1431). The surface was smooth, but had several bubbles, lines from the wrapper, and a few adhered bits.

The bar had a hard snap. The aroma was primarily a coffee roast. Some earthiness, a bit of nuttiness, and a sweetness were also present.

The chocolate tasted of roast, spice, and earth. The roast had both cocoa and smoke flavors. The spice included pepper. The earthiness seemed closest to soil. There was also some of the sweetness from the aroma.

The melt was smooth. The chocolate had a long length, with the flavor lasting 40 to 45 seconds after the chocolate was gone. The finish was somewhat tannin and somewhat bitter.

You can purchase Marou Lam Dong 74% online for $9.00 from Chocolopolis.
No comments:

Caputo's Deli is having a free shipping sale on chocolate through the end of the year with no minimum purchase requirement.

Caputo's has excellent prices on the many makers they carry, as well as several great chocolate bar collections. This is a perfect opportunity to get some amazing chocolate gifts for those you love, as well as for yourself.

Use coupon code CHOCOLATE during checkout for this free shipping offer. This code is valid through December 31st.

Note that this free shipping offer does NOT apply to their direct chocolate website (http://www.caputoschocolate.com), but they seem to have the same inventory and pricing on both sites.
No comments:

Email ThisBlogThis!Share to TwitterShare to FacebookShare to Pinterest
Labels: sale

Richard's Rating: 9.0
Colin Gasko reformulated Sambirano since we last reviewed it over two years ago. It is now made without any added cocoa butter, and the remaining two ingredients (70% cacao beans and 30% cane sugar) are both organic. The bar was not certified.

The cacao beans for this chocolate came from Bertil Åkesson's plantation in the Sambirano Valley of Madagascar. The bar was hand-crafted in the United States at Rogue's nut-free facility in Three Rivers, Massachusetts.

The 60 gram bar came sealed in cellophane inside a paper envelope. The best before date was October 2013.

Rogue created an incredible surface sheen (apologies for not having a photo, but that top surface was simply too reflective :). The bar was unscored and without any imprints or bubbles. Except for an oval from the pour where the sheen was uneven and some tiny adhered bits of chocolate, the bar appeared nearly perfect.

The chocolate was a medium brown Bitter Chocolate (PANTONE 19-1317) color. The bar had a hard snap.

The aroma contained fruit, roast, earth and wood scents. The fruit was mostly prune. The roast contained a hint of coffee. The wood seemed to be cedar.

The melt was creamy, with just a suggestion of fudge in the mouthfeel. The length was remarkably long, with the chocolate flavor lasting 50 to 60 seconds after the chocolate was gone. The finish was acidic.

Overall, this was a superb chocolate, and is now among my favorites.

You can purchase Sambirano online for $7.99 directly from Rogue or for $8.00 from Chocolopolis.
No comments:

Papua Neuguinea 75% was sold in the standard Labooko packaging containing two 35 gram bars. Each bar was individually wrapped in gold foil-sided wax paper that was glued into the folds of a heavy outer paper wrapper (which was taped closed).

The bar itself had a relief of "zotter" on a small smooth upper portion of the bar and imprints of "Labooko" and stylized cacao pods (one of which was covered in writing) on a textured lower portion of the bar. The best before date was November 27, 2013.

Unfortunately, the chocolate appeared to have bloomed slightly and had a medium brown Deep Taupe (PANTONE 18-1312) color. There were some bits of adhered chocolate and the surface was scuffed.

The taste contained flavors of roast, fruit, earth, and spice. The strong roast was mostly coffee and smoke. The only distinctive fruit flavor I identified was blackberry. The taste was also sweet with a molasses flavor and tannin.

The chocolate had a smooth melt. The chocolate flavor lasted more than 45 seconds after the chocolate was gone, giving a long length. The finish was tannin and somewhat bitter.

You can purchase Labooko Papua Neuguinea 75% online for €3,35 directly from Zotter.
No comments: