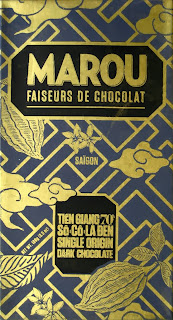 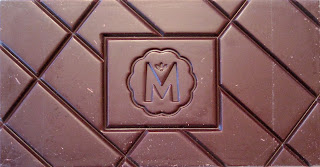 Tien Giang is one of five regional bean to bar chocolates crafted by Marou locally in Vietnam. Each bar is made with cacao from a different growing region within the country. The other four bars are: Ba Ria, Ben Tre, Dong Nai, and Lam Dong.

The outer paper wrapper of Tien Giang was a beautiful deep blue (and slight purple hue) with silk-screened gold ink lines and drawings. Inside, the large 100 gram bar was wrapped in thin bronze foil-sided paper.

The ingredients of Tien Giang were cacao beans, cocoa butter, and cane sugar. The chocolate had 70% cocoa solids and 30% sugar. The bar was produced in Marou's nut-free factory in Ho Chi Minh City. The batch number was 306 and the best before date was January 27, 2014.

The bar was scored with diagonal lines, giving pieces of different sizes. The center had an imprint of the Marou logo. The surface was smooth with a slightly uneven sheen. The color was a medium brown Dark Brown (PANTONE 19-1012). There were some bubbles and adhered bits.

The snap was hard. The aroma was primarily roast, with scents of coffee and smoke. I also smelled some sweetness.

Tien Giang had a smoky roast flavor that tasted initially quite strong. Other flavors that soon came forth included a complex spice with pepper, a fruit flavor that contained prune, and a sweetness that seemed to be a cross between honey and toffee. Some earthiness was also present.

The chocolate had a smooth melt. The length was long, with the flavor lasting over 50 seconds after the chocolate was gone. The final aftertaste was somewhat acidic and slightly tannin.

Tien Giang won a silver at the Academy of Chocolate 2013 awards.

You can purchase Marou Tien Giang 70% online for $9.00 from Chocolopolis.