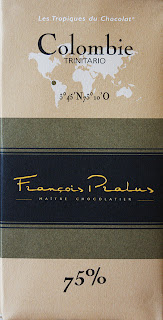 Colombie is just one of the many single origin chocolate bars made by French chocolate maker Francois Pralus. Using Trinitario cacao beans from Colombia, Colombie has 75% cocoa solids (including added cocoa butter), along with sugar and soy lecithin. The thick 100 gram bar was formed in the standard Pralus manner: imprinted with a cursive Pralus in the bottom right quadrant with the rest scored into 24 pieces. Inside the paper cover, the bar was wrapped in gold foil. The best before date of the bar we reviewed was 22 March 2013.

As you can see in the photo above, the surface of the bar was noticeably scuffed and had an uneven sheen. The chocolate had a medium-dark brown Bracken (PANTONE 19-1015) color. The bar had a hard snap.

The aroma of Colombie was a cocoa roast combined with some sweetness that smelled like butterscotch to me.

The chocolate tasted similarly, with flavors of roast, which included coffee as well as cocoa, and a sweetness that tasted to me like butterscotch. We also both experienced a nutty flavor. I noticed an earthiness as well.

The melt was smooth. The flavor lasted 20 to 30 seconds after the chocolate was gone, giving the chocolate a medium length. The final aftertaste was somewhat tannin and perhaps very slightly astringent.

Overall, we found Colombie to be rather mild, both in aroma and flavor, and while a good chocolate, it couldn't compare to the two best single origin chocolates we have reviewed from Colombia: Domori Teyuna and Santander Colombian 65%.